Home All Articles Staff Articles The Voice of Love 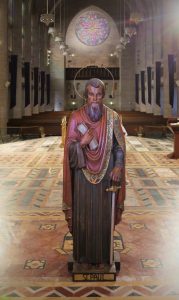 As in every Easter season, lately we’ve been pondering the earliest days of the Church by praying with the Acts of the Apostles at Mass. Today I invite us to focus mostly on one moment in those days: the conversion of Saul. Acts 9 tells us that the man is on a religious warpath: “Saul, still breathing murderous threats against the disciples of the Lord, went to the high priest and asked him for letters to the synagogues in Damascus, that, if he should find any men or women who belonged to the Way, he might bring them back to Jerusalem in chains.”

Current calculations (I Googled it) say that trip is 130-155 miles as the sparrow flies, but 1849 miles by modern car; it would take 26 hours to get there and 26 hours back. In a Chrysler. But Saul is officially requesting permission to do this on foot or perhaps with a horse – to put himself to the trouble. He is determined to go and torture these people, to bring them back in chains and drag them before the Sanhedrin, to fight this hard against the new and heretical-seeming WAY that has arisen in his own time and place.  He is ON FIRE for the God he thinks he knows.

So picture his strength, his contained fury, his determination, the fervor in his eyes and the steam coming out of his ears as he travels. And then imagine the kind of supernatural event it takes to scare this particular man, to knock him silly, to make him fall and crouch on the dusty, manure-tracked road, to squinch up his eyes in front of his buddies.

And then: can you hear it? Amid this smackdown comes a call. Much is to be gained, I think, in considering the tone of voice we imagine here.  Perhaps we have done ourselves a disservice if we’ve been hearing a harsh shout.  Because consider:  what tone of voice from Heaven would really, truly knock your habits and opinions to the ground, make you change your mind and heart 180 degrees?  I mean, consider what tone such a change would require even in your own home or on social media.  It might be a tone we don’t often hear.  But it’s coming from the one who – according to both Isaiah and St. Matthew – will not break a bruised reed, nor quench a smoldering wick.  From our perfect, compassionate Father surely must come a beautiful, tender voice. And because of this, I suggest, the response we hear next becomes possible: We suddenly hear amazing humility from a man who – all the way up to one second ago – was a feared, driven, murderous, self-righteous scholar.  We hear one of the deepest beginnings of our very own faith: “Who are you sir?”

This is the query of a very fresh saint.

My prayer for us this week is that we dare to allow ourselves to hear God’s tender, loving voice in such a way that it enables our own humility, conversion, and zealous search for Love.