Fr. Mario Amore grew up in the Woodhaven-Brownstown area where his family still lives.  He attended St. Pius X in Southgate and Gabriel Richard High School in Riverview. Afterward, he served the Church in music ministry while attending classes at Sacred Heart Major Seminary. After much prayer, he entered formation in the Fall of 2009.  Fr. Mario was ordained a priest for the Archdiocese of Detroit on May 23, 2015 and then served as the Associate Pastor at Our Lady of Sorrows and St. Hugo of the Hills.

Since 2019, Fr. Mario has been Pastor of St. Aloysius and Our Lady of the Rosary; he loves being a priest here in the City of Detroit. He also enjoys playing volleyball with the young adults, playing piano, and traveling. Father Mario is excited to now serve as the Moderator and family pastor for our family of parishes and says he “very much looks forward to getting to know my new parishioners!”

Fr. J.J. Mech was born the youngest of a large family and is now an uncle and great-uncle many times over.  He is very family-oriented and even wrote his thesis on family.  Fr. J.J. was ordained 26 years ago and has been pastor for 21 of those years.  He has served in large suburban and smaller inner-city parishes and has loved being pastor. He has been the Rector of The Cathedral of the Most Blessed Sacrament since 2015.

While he is a Spartan at heart and even attended MSU, Fr. J.J. received both his undergraduate and graduate degrees from Sacred Heart Major Seminary, and now serves as a Trustee on their Board. While he wears a lot of hats and is involved in many other ministries, he is quick to share that he loves his dog Annie (a black lab mix), and that he has a passion for art and architecture.  He is an artist himself.  Above all, Fr. J.J. “loves his vocation and is excited to serve Christ in new ways as we enter into Family of Parishes.”

Fr. John Owusu-Achiaw is a member of the Congregation of the Holy Spirit (Spiritans). He was ordained in 1992 in Kumasi-Ghana.  Fr. John worked in Nigeria from 1992—1999 in SS. Peter and Paul and St. Mary Parish, then was transferred to Holy Spirit Parish in the Archdiocese of Kumasi-Ghana. From 2009-2011 he was appointed to Old St. Mary’s as Parochial Vicar. While assigned at Old St. Mary’s, Fr. John received Clinical Pastoral Education from William Beaumont Hospital.  In 2011, Fr. John was assigned to Our Lady of the Valley Parish in Hemet, California as a Parochial Vicar, and then in 2013-2021, he was the Pastor at St. Ambrose in Chicago. While in Chicago, Fr. John pursued a master’s degree in Justice Ministry from the Catholic Theological Union Seminary. In 2019 Fr. John became a naturalized citizen of the United States and is “happy to be assigned as the Pastor of Old St. Mary’s in Greektown.”

Fr. Casimir Nyaki was born in 1959 in Tanzania. He majored in Philosophy at Ntungamo Seminary in the Kagera Region of Tanzania, and completed his novitiate at Magamba Lushoto, Tanzania. After making First Vows in 1986 at Magamba, Fr. Casimir pursued Theological Studies at Tangaza University College in Lang’ata Nairobi Kenya for four years.

On June 2, 1990, he was ordained Priest at Usa River Junior Seminary in Arusha Tanzania. The first appointment given was to teach and form Seminarians at Usa River Junior Seminary for three years. Then he performed Pastoral Ministry at Bagamoyo Parish on the East Coast of Africa for about three years. Fr. Casimir then undertook studies in philosophy at Duquesne University in Pittsburgh. After graduating and teaching at Duquesne from 2007 to 2012, he was appointed to teach at Spiritan Missionary Seminary from 2012 to 2020. From August 2020 to April 2021, he served as Administrator at Old St. Mary’s, and is now appointed a Vicar in our Family of Parishes.

Fr. Matthew Hood is the Chaplain for Detroit Catholic Campus Ministry which serves Wayne State University and the University of Michigan-Dearborn as well as the other local colleges and universities. Fr. Hood graduated from Sacred Heart Major Seminary in 2017 and has served as an associate pastor at the Church of the Divine Child in Dearborn and St. Lawrence Parish in Utica.

Deacon Mike Van Dyke was born in Grand Rapids in the early 1960s and baptized on the day before Christmas. He is the oldest of three. After moving numerous times through many mid-west states, his family returned to Grand Rapids in time for him to finish high school and attend Michigan State.  While he was finishing up his degree, his family moved to Atlanta, where he met his wife, Juanita. This summer they celebrate their 36th anniversary!

In 2000, he convinced Juanita to move to Michigan, a decision they do not regret. Deacon Mike’s calling to the diaconate began shortly thereafter.  During his discernment, Juanita joined the Church at the Easter Vigil in 2008.  With Juanita’s blessing, Deacon Mike applied for and was accepted into formation in 2013.  He was ordained to the permanent diaconate on October 5, 2019 and assigned to the Cathedral of the Most Blessed Sacrament. 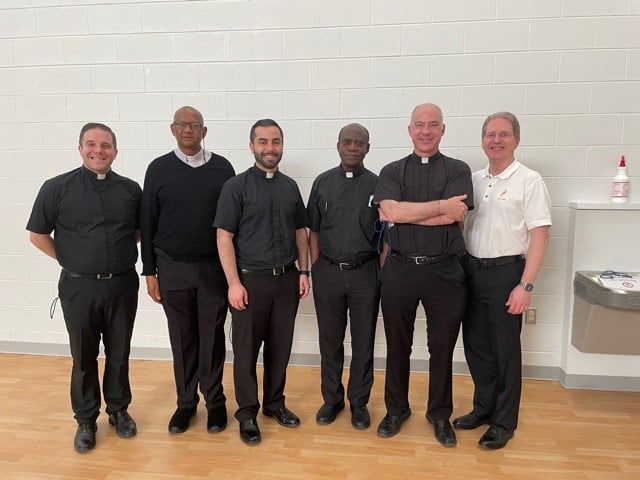