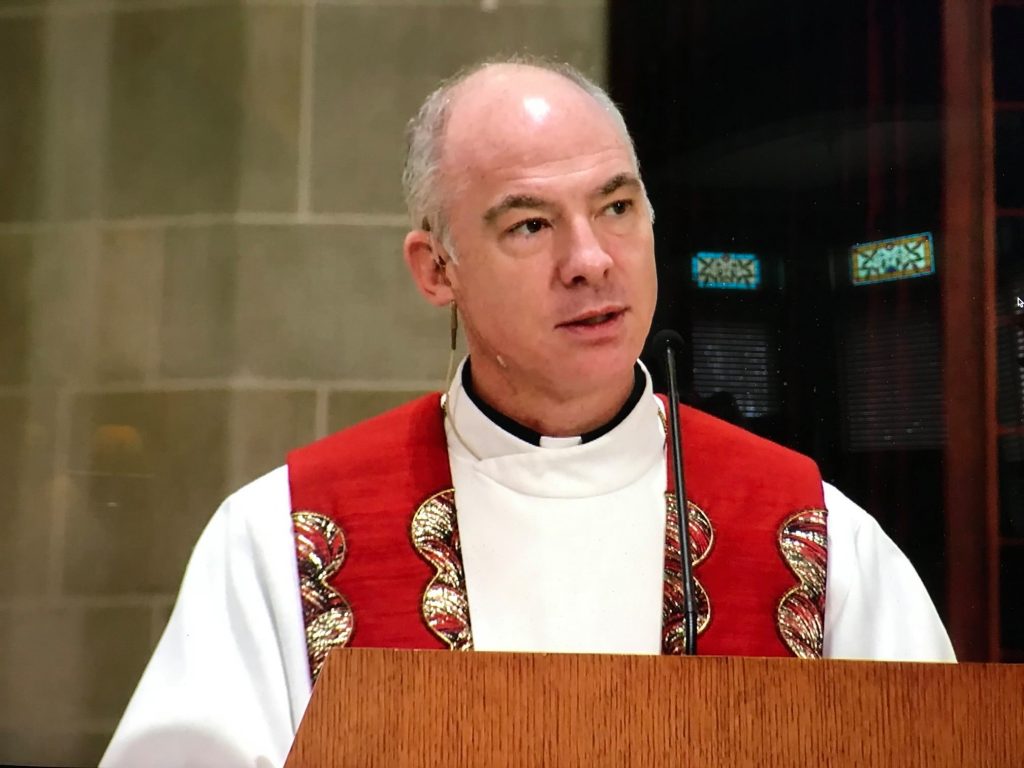 Greetings to all of you who are able to participate today. This is certainly not the way we want to gather as the believing community. I know this has been daunting. But be assured that the Archbishop, my brother priests and I have increased our prayers for all of you.

Speaking of Daunting, Archbishop Vigneron asked me to preach today at the “Liturgy of the Lord’s Passion”. It seems, in the situation we find ourselves, that it’s a little weightier than normal as we focus at today’s liturgy on suffering and death. We have gone through (as someone said to me) the “Lentiest Lent” in all of our memories. We have been confronted by suffering and death, not just today, but for weeks. Some of you might even have someone missing from your table because they are fighting the virus in a hospital, or God forbid, someone’s missing who succumbed to the virus and maybe you could not have a proper funeral celebration. Like many of you, I too have family members on the front lines working those long hours and trying to care for the sick. And for some of you, you may be experiencing the suffering of loneliness, isolation, job loss, facing the challenge of not being able to pay your bills, or not even having enough food.

Since all this began, I have had the opportunity to council some folks over the phone. Some have asked me the erroneous question “Why did God cause this virus?”, or have asked the unanswerable one “Why is God allowing this to happen?” Most likely, these questions originated out of the emotions of anger or fear. This is completely understandable, BUT if that is how we see the situation, I believe we are not looking at it through the correct lens.

Just maybe, without even realizing it, we have become complacent in our understanding of what Life and Death are all about. Society has trained us to only look at life and to avoid focusing on Death at all costs. This is not a fun thing to say, but Whether it is next week or in 50 years, we are all going to die. But we avoid looking at that because it causes us anxiety.

I think it is good for us to ask ourselves: “what is the understanding that we, as Jesus’ disciples should have and embrace?” You and I just heard this amazing Gospel proclaimed. But just maybe because we have heard it so many times, we, in a sense have allowed it to lose its power. Again, what we just heard is the confrontation of death with Life itself, Jesus on the Cross, The Power of Jesus. That is this scriptures theme.

It is entitled “HOW DEATH BECAME LIFE”

It begins… Death was born on a flaming day; at least that is how she remembered it. When she came forth full grown into this world, it was alight with all the colors afire. The light seemed to come from a sword which an immense angel held aloft guarding a door to which she knew not where.

At first, death felt like a stranger. She wandered lost. One day she saw a beautiful bird with gorgeous plumage. Gently she walked up to it and stretched out her hand to feel the softness of the feathers. But, no sooner had her fingers touched it, the bird fell at her feet, cold and still. Death picked it up and wondered why it had stopped singing and living. This was how she discovered her dreaded power.

Slowly years flowed into eternity. Death traveled through them touching this animal, or this fish and flower. By this time she knew the earth well and she noticed a certain kind of creature, human beings. They held in their faces a strange reflection of God. It was as if they had been made in the image of God.

Death took a long time to touch humankind, but once she did, she tasted the fullness of her awesome power, and she knew loneliness to the very last drop. Centuries turned into millennia, and death claimed all living things for her own. Yet there was a hunger in her that grew. In her silent kingdom nothing remained, all living things crumbled and turned into dust at her touch. She was always left with loneliness. She almost grew mad with loneliness and desired to have and hold something that would last.

Well it was a great time of plagues and storms and tears flowed down her emaciated cheeks and death crisscrossed the whole earth with the swiftness born of frenzied hunger. Throwing herself at the children of human beings, she embraced them passionately, hoping against hope that she might see a smile or hear a word lift the pall of her loneliness that isolated her from all living things. But, she learned that human beings feared her above anything and shrank from her approach.

One day, tired and weary, she sat on a hill beneath three crosses on which three men were executed. She did not feel like looking at or touching any one of these. She was too tired and too lonely. So, she just sat there, her weary head in her hands, and she wept, bemoaning her loneliness.

Suddenly above her she heard a voice, “I thirst”. She looked up and her gaze met two fathomless eyes. From their depths flowed a brilliant warm light, the likes of which she had

never experienced. Immediately she stood up, erect, tall and thin. She wanted to touch him with love and respect, but did not dare. Very self-consciously she put her hands behind her back and stared at this bleeding, disfigured face, as if she could never see enough.

She heard him speak some short sentences. Each word she locked into her heart and relished them. The very echo of the voice weak with pain and hunger moved her deeply. His eyes called to her in a wordless message and she gently touched his cheek. He seemed for an instant to smile for her alone. Then like all the others before him, he closed his eyes and became lifeless and cold.

She knew that he was different from all the others. So, she lingered awhile and saw him taken down from the cross. She saw his mother hold his lifeless body and cradle his ashen face. She saw them carry his body into a grave in the hallow of a cave. But, just as the soldiers rolled the stone to the entrance to seal it, she entered just before it was put in place.

What passed between him and death no human being will ever know. But on the following Sunday, some woman came to the tomb. Death was not there. Since that Sunday, all who look upon death with the eyes of faith see it differently. They see that love is life and death is only a gateway to eternal life. The End.

In this crazy time, more than ever before, we need to embrace again what Jesus did for us. Sometimes we can think that because Jesus was God that he somehow suffered less. Like he was only play acting. But as we hear this Gospel, we can only conclude that because he was the Son of God, he suffered more intensely.

As we walk with Jesus these final days before Easter, with all of our fear, our questions, and anxiety, we need to grapple with the only force that can possibly overcome death: God’s love in Christ. This includes not only our physical death, but the death of our soul which the Church calls sin.

The scriptures tell us; the Russian legend retells us; this liturgy reminds us that the only thing that overcomes death is God’s love in Jesus. So, in these few days before Easter, in the midst of this crisis, let’s meet this love.

You and I are called today to “reverence the cross”. But before we do that, let’s grab all that fear; let’s take all the deadly things in our lives, including our sin, our doubts, and let’s hand them over to Christ. I invite you to make a confession in your heart. Right now, say “Bless me Jesus for I have sinned. I have known death.” Tell him that you want the burden lifted. You want to see life. You want to Unleash the Gospel. Tell God that you want to be alive again in your faith.

Today we DON’T celebrate death, we celebrate the life we receive through the cross. We celebrate that Jesus waits high on his cross to take away our death, whether it be physical, moral, or mental.

In your prayerfulness, in your life, turnover everything to Christ. In these uncertain times: Remember, Death is defeated. Only Jesus has the power. Only His love is stronger than death.

Exposition on First Fridays after 8 AM Mass and Second Thursdays 9-10 AM.