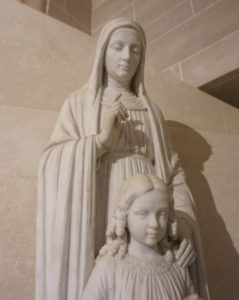 In 2011, St. Anne, mother of Mary and grandmother of Christ, was named by the Vatican as the patroness of our Archdiocese. Why? Archbishop Vigneron stated, “St. Anne has been integral to the story and history of Detroit, and the first Catholic presence in southeast Michigan.” Detroit’s relationship with her dates to the city’s founding; the first Mass in the Archdiocese was celebrated on St. Anne’s feast day, July 26, in 1701. That same day, Antoine de la Mothe Cadillac and 51 settlers established Sainte Anne de Detroit – the first Catholic church in Detroit and the 2nd-oldest Catholic parish in America. Catholics pray to saints for their intercession and look to their lives as stellar examples. St. Anne has heard and guided many Detroiters for centuries!

To commemorate St. Anne’s feast day, the Archbishop will preside over an ecumenical vesper service on Tues. July 25 at 7 PM at our Cathedral. The Very Rev. Nicolaos Kotsis, a Greek Orthodox pastor, will be the guest homilist and our relic of St. Anne will be reverenced. Please join us!